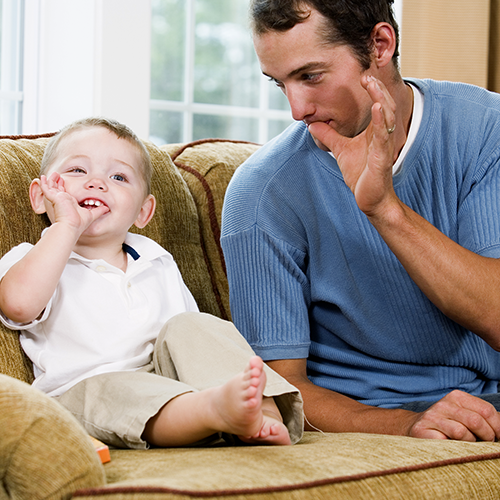 It’s difficult to distinguish between fact and fiction in the age of the Internet. So much information is at our fingertips and within seconds we can find an answer to almost any question.

But what happens when there are conflicting answers to the same question? The EIRG uses scientific research to help us answer commonly asked questions by parents.

In this blog post, we wanted to review some of the evidence that exists on the topic of sign language and children’s language learning and answer some questions that parents frequently ask.

My child does not have any hearing loss, but I’ve seen a lot of programs to teach me to use signs with my child.  Will signing with my child help him/her learn language faster?

There are many programs and classes to teach parents how to use baby sign, making claims that signing leads to better language development and even higher IQ.  But what does the evidence say? One study taught one group of parents to create and use symbolic gestures with their children, and then compared the children in this group to children in a comparison group.  The children in the gesturing group had better language skills one year later (Goodwyn, Acredolo, & Brown, 2000).  However, another group of researchers in England found that parents’ use of signs did not result in better child language outcomes (Kirk, Howlett, Pine, & Fletcher, 2013).  To better understand these mixed results, another group of researchers reviewed ten studies that investigated the impact of baby signs on children’s language development, and found that the evidence was unclear as to whether signing helped children’s language skills (Fitzpatrick, Thibert, Grandpierre, & Johnston, 2014).  While it is frustrating that we don’t really know whether signing helps children learn language more quickly, it is important to note that no researcher found that signing was bad for children.

My child has hearing loss and we are waiting for a cochlear implant.  Should I use sign language with my child while we are waiting?

In the United States, 10,000 infants are born each year with sensorineural hearing loss.  Of these 10,000 children, 96% have hearing (non-deaf) parents who use a spoken language.  These families are faced with some unique challenges, including how best to teach their new child to use language.  For many parents, this amounts to “how can I teach my child to speak English/Spanish/etc., like I do?”  Other parents may consider using a signed language, like American Sign Language (ASL), or some mixture of both ASL and a spoken language.  The question is, what will work best?

Another group of researchers and medical professionals wrote an article advocating for the use of sign language with deaf children (Kushalnagar et al., 2010).  These authors argued that for hearing children, speaking two languages has many benefits; for deaf children, they argued, knowing how to speak and sign should have benefits as well.  They also point out that while cochlear implants help many deaf children to learn to use spoken language, not all children benefit equally.  Furthermore, in noisy environments (like a classroom or a restaurant), it becomes much harder to understand spoken language using a cochlear implant.  For these reasons and others, the authors of this article advocate for parents and families of deaf children to learn and use sign language with their children, even after cochlear implant surgery.

We also know that parent-child interactions are very important for children with hearing loss and are associated with better language outcomes after children receive a cochlear implant (Niparko et al., 2010).  If signing helps increase parent-child interactions, this may be beneficial for children with hearing loss before implantation.  Based on the research that has been done so far, we can’t say for certain that sign language helps, but we do know it won’t hurt so long as oral communication is also emphasized.

Will signing change the organization of my child’s brain?

Several studies have shown that the auditory cortex, the portion of the brain that is activated when people with normal hearing listen to speech, functions differently in deaf adults.  Some parents worry that teaching their child sign language will change this area in their child’s brain as well, and make it more difficult for him or her to learn spoken language.  While this sounds like it could be true, the evidence says otherwise.  For instance, in one study, researchers compared deaf adults who use ASL and hearing adults who grew up using ASL and spoken language.  The researchers found that only the deaf adults had brain differences, and not hearing adults (Fine, Finney, Boynton, & Dobkins, 2005).  This suggests that brain differences in the auditory cortex are due to prolonged hearing loss, and not to use of sign language.

We do know that for children with profound hearing loss, the amount of time a child spends without any auditory input from hearing aids or a cochlear implant is related to changes in the auditory cortex (Lyness, Woll, Campbell, & Cardin, 2013).  For families who decide to pursue amplification, this finding emphasizes the importance of obtaining a cochlear implant early in life (Niparko et al., 2010).